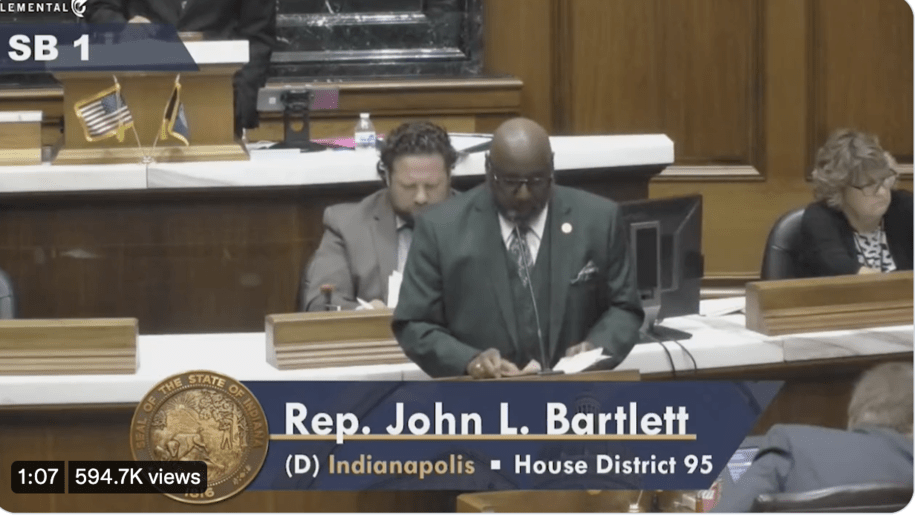 Bartlett explains that part of the burden of pregnancy should be placed on men.

Republican Rep. Wendy McNamara rose to counter Bartlett’s amendment and said, laughing, that she would “measure his comments” because she “didn’t want to get in trouble.”

Bartlett responded to McNamara saying, “Some may think it’s a joke, but it takes two people for a pregnancy to happen. And putting all the burden on one woman, I just think it’s unfair.

In the state, Rep. Bartlett (D) introduces an amendment to the anti-abortion bill to ban erectile dysfunction drugs: ‘We force young girls to be mothers, but we don’t force men to be fathers… If unwanted pregnancy is an act of God, then impotence must be an act of God.” pic.twitter.com/g8QbQGrUqv

Since last Monday, the Indiana House of Representatives has been debating a outrageously extreme anti-abortion bill SB 1, which has already passed the House Committee on Courts and Criminal Code with an 8-5 vote and the GOP-controlled Senate, CNN reporting.

Currently, Indiana allows abortions up to 20 weeks after fertilization. The new bill allows abortion in cases of rape, incest and when the life of the pregnant person is in danger, but it would effectively ban abortion at all stages of pregnancy. However, Republican state lawmakers in Indiana are working to eliminate the rape and incest exceptions.

IN State Rep. Engleman (R) introduces an amendment to eliminate the rape and incest exceptions in the new anti-abortion bill. Rep. Fleming (D) asks if this would prevent a 5th grade (10 year old) rape victim from getting abortion care.

Engelman sighs: “It is… It is.” pic.twitter.com/LutSbldJ5n

Republican State Senator Susan Glick sponsored the bill and said it’s “an expression of where we think the state of Indiana is right now”.

In State Rep. Davisson (R) advocates for the forced birth of non-viable fetuses.

When asked what he would say to the children of a mother going through a pregnancy resulting in a stillbirth: “[None] of us are guaranteed tomorrow. You have to accept death as a consequence of life.” pic.twitter.com/cAUEDEOZ8n

The bill also criminalizes doctors who perform abortions with a six-year prison sentence and a fine of up to $10,000. IndyStar Reports.

The Indiana House will vote on SB 1 on Friday. Bartlett’s proposal was defeated in an unrecorded voice vote, KPC News reported.